Home > Publications > Enterprise as an instrument of civilization

Enterprise as an instrument of civilization 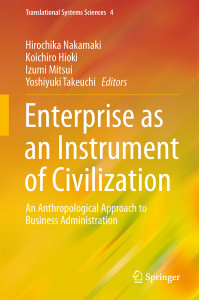 Volume 4 of the Springer Japan book series “Translational Systems Sciences” is being published.

It is about an anthropological approach to business administration. “If civilizations are considered as human device/institutional system and enterprises are one of the primary vehicles to update civilizations in future, the elements of civilization tat enterprises create become a critical matter. When it matters, we need to study redesigning systems in connection with how to control corporations as a system. It is also necessary to consider compatibility with existing elements of civilization and connection with cultures as behavioral patterns of human beings which are more strongly coupled.” (p.15)

“Translation” in the series title means bridging the gap between basic science and practical applications. This translation is enhanced by a systems perspective. Trans-disciplinary and cross-cultural ways of understanding and practicing throughout the disciplines and fields of practice is facilitated.

The Bertalanffy Center supports the book series, as it shares the aims of the research to be published – aims that find its point of departure in General System Theory. The book series is edited by two Japanese scholars, Kyoichi Kijima from Tokyo, and Hiroshi Deguchi from Yokohama. Among the members of the Editorial Board are also international experts like Mike C. Jackson from Hull, UK. The BCSSS is represented by Wolfgang Hofkirchner.

Read details about the book.