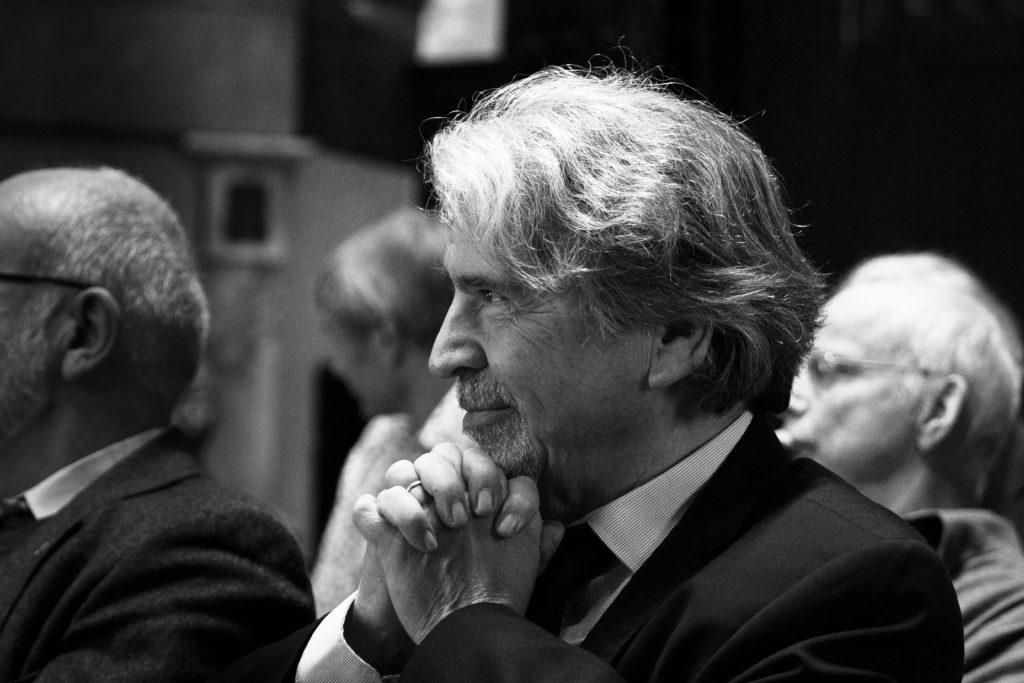 Ulm University celebrated the 70th birthday of Klaus Kornwachs, system theorist and philosopher of technology, member of our Scientific Council. The Humboldt-Studienzentrum für Philosophie und Geisteswissenschaften, part of the School of Humanities, convened on October 20th a Festcolloquium. Six speakers highlighted six fundamental aspects of technology that form part of a festschrift that is in print and was prepared by Volker Friedrich from Hochschule Konstanz* (see programme here). 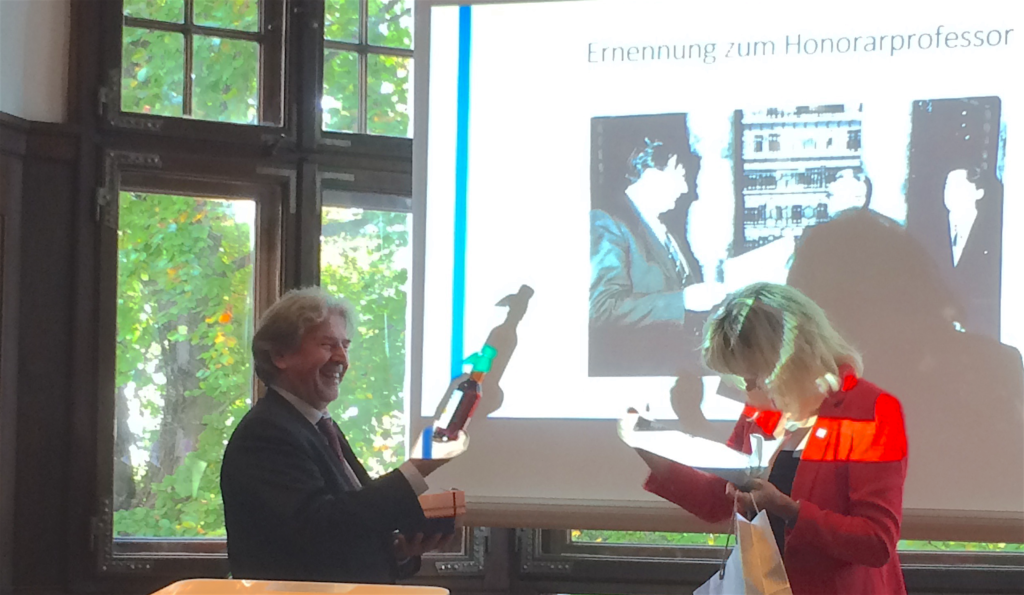 Kornwachs (left) receives gifts from the managing director of the Humboldt-Studienzentrum, Prof. Renate Breuninger. In the background you see a black-and-white slide featuring the appointment of Kornwachs as Honorary Professor at that center in 1990 (photo: W. Hofkirchner)

On the eve of that festivity Kornwachs had invited participants of his post-graduate seminar in philosophy all of whom have been making their ways in a variety of professions and activities since. Kornwachs himself presented what he called an “interim report” of his (academic) life and its impact for the betterment of society.

Kornwachs started to study philosophy in Tübingen and added mathematics and physics in Freiburg. After the diploma in physics he made his PhD in philosophy. He habilitated in philosophy on the topic of open systems and information. He worked with the Fraunhofer Institute for Industrial Engineering IAO in Stuttgart. In 1988 he founded the Deutsche Gesellschaft für Systemforschung. In 1990 he was appointed Honorary Professor at the Humboldt-Studienzentrum in Ulm. In 1992 he became chair of Philosophy of Technology at the Brandenburg University of Technology in Cottbus, chair of the Center for Technology and Society there and built up the bachelor- and master study “Culture and Technology”. He was active in the “Verein der Deutschen Ingenieure” (VDI) and is member of acatech (“Deutsche Akademie für Technikwissenschaften”). Recently, he was appointed Honorary Professor at the China Intelligent Urbanization Co-Creation Center at Tongji University, Shanghai.

The Bertalanffy Center wishes Kornwachs to preserve his sense of humour and we look forward to his successful working towards the next report!

* Wolfgang Hofkirchner had a talk on the question: “Können wir leben, was wir tun?” | presentation (in German)