Maria von Bertalanffy, the wife of Ludwig von Bertalanffy, kept a diary on all her private life with Ludwig since they left Austria (1948) until his death (1972) and beyond that. Obviously you will find in there important dates about the professional life of Ludwig. Each year sees one diary with an entry for each day of the year written in German. There are only three days she refused to make an entry. All of these diaries were recently donated to the BCSSS  by the widow of Ludwig’s son Felix, Gisèle. They were handed over by Michel Saint-Germain, Professor emeritus of the University of Ottawa, who met Maria von Bertalanffy in 1976. They are now located together with the rest of Bertalanffy’s legacy in the LvB Archive at the Department of Theoretical Biology at the University of Vienna. This department belongs to the follow-up institute of the Institute of Zoology Bertalanffy worked with during the World War II. The diaries are now open to research. 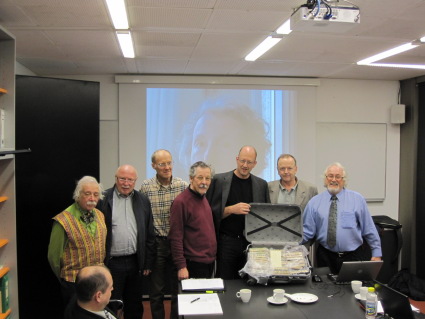 Michel Saint-Germain (right) is handing over diaries of Ludwig von Bertalanffy’s wife Maria to the BCSSS.