Thanks to Michel Saint-Germain another 12 boxes made their way from Gisèle Bertalanffy’s home in Lindsay, Winnipeg, Manitoba, Canada, to Vienna, Austria. Our archivist will find among others letters, diaries of Maria von Bertalanffy, slides and 8 mm shoots made by Ludwig von Bertalanffy, and the patent of nobility. 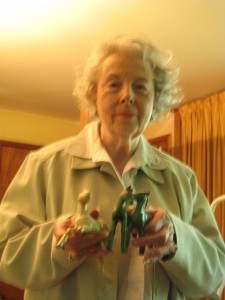 Gisèle Bertalanffy showing the three porcelain horses that remained kind of intact after the WW2 bombing of Ludwig von Bertalanffy’s apartment in Vienna, during which all his library had been destroyed (photo: Michel Saint-Germain)