Home > Meetings > “Designing Design” at the Digital Bauhaus Summit 2015, a contribution in collaboration with the BCSSS

“Designing Design” at the Digital Bauhaus Summit 2015, a contribution in collaboration with the BCSSS 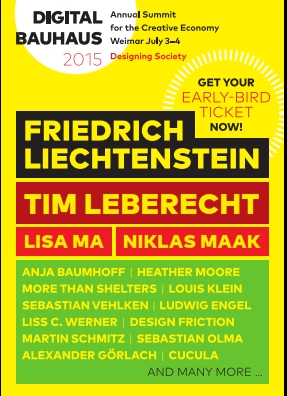 After a successful first public appearance at the Information Studies Summit in June 2015 in Vienna, we were proud to be invited at the Digital Bauhaus Summit for the Creative Economy on Designing Society in July 2015 Weimar, Germany. Liss C. Werner from Tactile Architecture Berlin, co-leader of the BCSSS Research Group on Socio-Ecological Systems and Design presented her talk on “Design Gestalten”.

In 1995 Nicholas Negroponte stated that the “The change from atoms to bits is irrevocable and unstoppable”. 30 years later we may re-view Negroponte’s statement and claim that the merging from atoms and bits will perpetuate further with the advent of smart skin and wearable computers. The body now acts as communication device between the individual and its physical and virtual environments. Its modification where cyborgian and humanoid genes cross, describes a fundamental change of the body’s actual material and its new role in the local and urban environment, in a macro- and micro-scale as semi-autonomous communication interface. Architects, designers and sociologists are challenged by a tabula rasa convergence of hard and soft matter, biological computing and the artificial intelligence body.

The session addressed among other critical questions, do we need to redesign Design in the age of a hacked body? What are the new challenges for future Gestaltung of society? And, is there a general System residing on a Meta-Level of Design with or without artificial computation?

In its second year the Digital Bauhaus Summit took on the motto „Designing Society“ stating: “Having buried the deadly political utopias of the twentieth century, we encounter utopian visions of social engineering and re-design anew – from the microscopic to the large scale. Design has become a leading theme of our epoch, expanding from its traditional domains of objects, products, and surfaces into the realm of consciously shaping and reforming everything else: from technology to work, from money to law, from social processes to politics. But can design really live up to such grand expectations?” For more information and impressions please visit the wonderful designed website at http://www.digitalbauhaussummit.de/