From 27 – 30 January, 2014 , a workshop for students was held under the title “Understanding complexity: systems, emergence and evolution“. It was organised and introduced by BCSSS Fellow José María Díaz Nafría. In addition, the  Center was represented by Rainer Zimmermann who gave a lecture course on the foundations of the theory of emergent systems, applying them especially to the social discourse in urban living quarters.

The first two sessions of Zimmermann dealt with the foundations proper, both with respect to a philosophical grounding of the theory and a discussion of mathematical methods, respectively. The tenor was on the representation of communicational processes by means of network theory. The third session introduced explicit applications to complex urban systems. The important point was to discuss a conjecture (itself a consequence of topos theory in fact) that relates lexicology, syntax and semantics of the everyday communicational discourse to the topological and geometric structure of social space. The fourth session gave a historical overview about the structural aspects of urban evolution in Europe, starting from the ancient polis network of the Greeks and discussing then the Roman provincial city system from which eventually the modern European city emerged as visible since the founding of the Commune di Bologna in 1115, leading forward to the modern city of the 19th century of which Paris is the prime paradigm, and finally to the city of the 20th century. A short summary of the most important points concluded the lecture. The fifth session gave the audience occasion to ask questions and to discuss single aspects of the topics introduced.

Gordana Dodig-Crnkovic from the International Society for Information Studies gave a video presentation on complexity and computation. 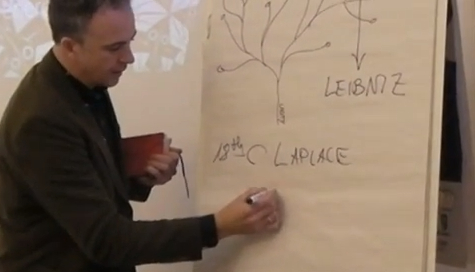 All videos can be viewed here.