In December 2018 the President of the BCSSS, Alexander Laszlo, visited Charles François and his wife in their residence in Buenos Aires, together with the Coordinator of the Group for the Study of Integral Systems (GESI), Eva Sarka.
Alexander and Charles François discussed, among many other professional and personal topics, the life work of Charles François, the International Encyclopedia of Systems and Cybernetics and his wish to make it publicly available as well as expandable.

A Precious Gift and an Important Patronage.

A beautiful present was handed over to our President, representative for the BCSSS. Charles François 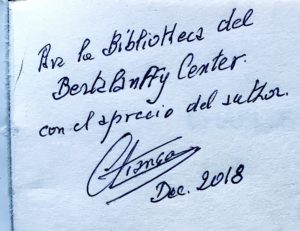 endowed us with a copy of his original first edition of the Spanish dictionary “Diccionario de Teoría General de Sistemas y Cibernética: Conceptos y Términos” for the BCSSS’ archives. He wrote a dedication on the inside cover page that reads “For the Library of the Bertalanffy Center, with the esteem of the author.” 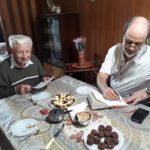 Significantly more important to us is, that Charles François wishes, that the BCSSS takes over the stewardship for his life work, the International Encyclopaedia of Systems and Cybernetics. We are very proud and thankful for the confidence shown to us, and we will take our duty to safeguard his heritage very seriously. It is a great honour to us to have received Charles François’ desire and wish in this fine meeting in Buenos Aires.

Charles François is a man with a highly interesting history. He was born in Belgium in 1922, was educated in Belgium as well and lived in Central Africa from 1945 to 1960, first as an administrative officer and later as owner of his own business. Charles François retired from the Belgian Foreign Service in 1987. His first contact with Cybernetics was in 1952 through Norbert Wiener’s foundational 1948 work on Cybernetics.
In 1958 he became a member of the former Society for General Systems Research (now ISSS). From 1970 on he was a participant in numerous meetings of various Systems and Cybernetics Societies, he was also a member of the board of some of them and integrated the editorial board of various journals on Systems and Cybernetics. He, furthermore, is author of numerous papers on systemic topics, he also published a book in French on “Cybernétique et Prospective” (International Association of Cybernetics, Namur, 1976) and an “Introducción a la Prospectiva” in Spanish (Pleamar, Buenos Aires, 1978). In 1985 he published in Spanish his study on “El uso de Modelos Sistémicos-Cibernéticos como metodología científica” (Systemic-Cybernetic Models used as scientific methodology) and in 1986 “Enfoques Sistémicos en el Estudio de las Sociedades” (Systemic Approaches to the Study of Societies).
In 1992, he published his “Diccionario de Teoría Generale de Sistemas y Cibernética” (GESI, Buenos Aires), the first work of its kind in Spanish (475 terms).
François lives in Argentina since 1963 and created the Argentine National Division of the ISSS in 1976. 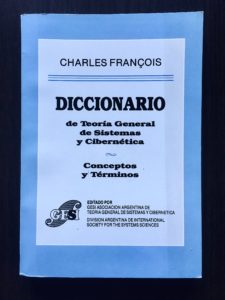 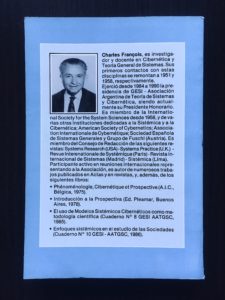