Home > Emergent Systems Information and Society > Is there still a distinction between a Human and a Robot?

Is there still a distinction between a Human and a Robot?

The IEEE (“Institute of Electrical and Electronics Engineers” – the world’s largest professional association) recently published Version 2 of Ethically Aligned Design: A Vision for Prioritizing Human Well-being with Autonomous and Intelligent Systems (A/IS), produced by the IEEE Global Initiative on Ethics of Autonomous and Intelligent Systems. This initiative consists of several thematic committees comprising some hundred experts in the field, including academia from humanistic and technical disciplines along with leading people from industry, governments and civil society from all continents. 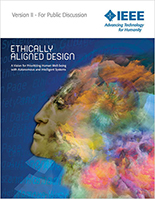 System theorist Ludwig von Bertalanffy was a defender of humanism and a critic of robotics. Half a century later, the section authored by the Committee for Classical Ethics in A/IS suggests an answer to the question of whether there still is a distinction between a human and a robot? It bears on philosopher Rafael Capurro’s profound considerations that can be translated into systems theory language when addressing “the uncritically applied anthropomorphistic approach toward A/IS” that “erroneously blurs the distinction between moral agents and moral patients (i.e. subjects), otherwise understood as a distinction between “natural self-organizing systems and artifcial, non-self-organizing devices”. Such “devices” cannot, by defnition, become autonomous in the sense that humans or living beings are autonomous” (p. 195). The terminology used is “both dangerous and misleading in that it encourages anthropomorphistic expectations of machines by human beings when designing and interacting with A/IS.” It is only metaphoric, since “[t]his is how language works and how humans try to understand their natural and artificial environment.” But “the difference must be maintained, especially as A/IS begins to resemble human beings more closely” (p. 196).

This is also an argument against the flat ontology of Bruno Latour’s Actor-Network-Theory (ANT) which enjoys great popularity among the Science and Technology Studies. ANT fails to recognize the systemic nature of technosocial systems: technology embodies concrete social relations but inheres at the same time a potential that transcends the actual realisation of its possibilities and thus needs ethical design.

Wolfgang Hofkirchner is involved in the Classical Ethics Committee.

The initiative aims at a final text provided as a handbook and material for curricula as well.