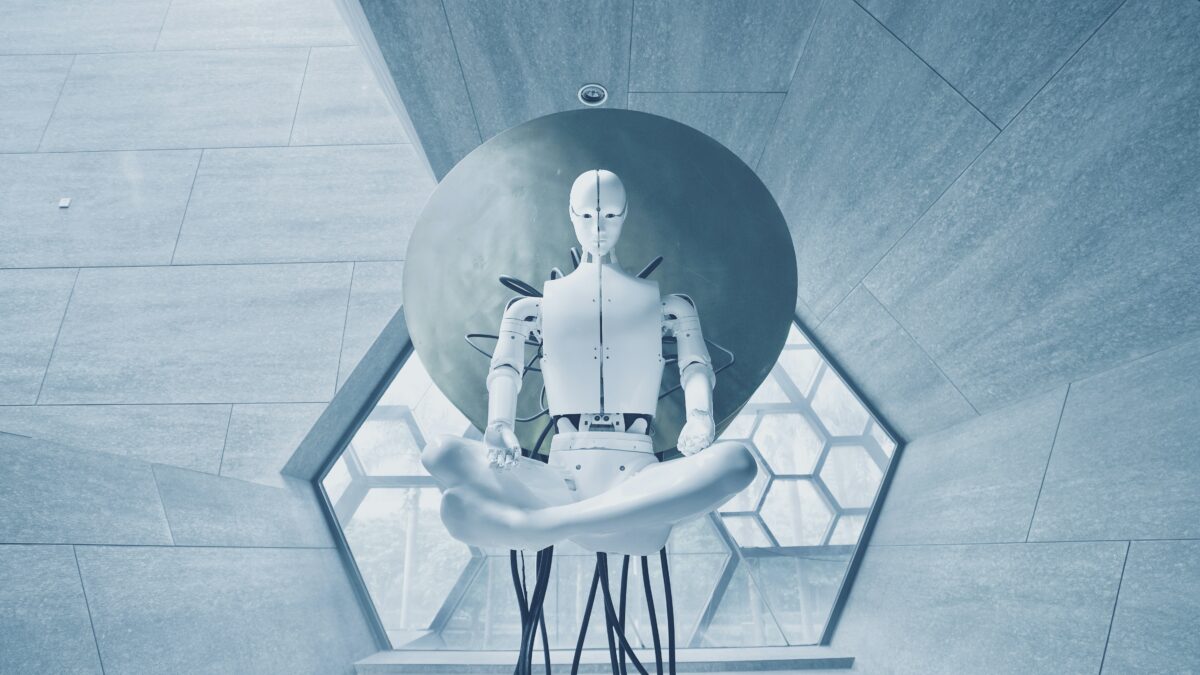 Felix Tretter and Stefan Blachfellner of the BCSSS were responsible for the organisation of this event, which was originally planned as a direct meeting. This format had to be cancelled due to the Corona crisis and could be transformed into the electronic format of a zoom conference on Thursday 19.3.2020, at the last minute so to speak.

First Felix Tretter and Stefan Blachfellner introduced the development and the program of the conference:

The famous Viennese philosopher and biologist Ludwig von Bertalanffy, one of the founders of the General Systems Theory and eponym of the Bertalanffy Center, to whom the BCSSS is dedicated, criticized in his book “Robots, Men and Minds” (1967,1) the alarming convergence of the “rattomorphic” image of man of modern behaviorist psychology and the computer model of man through technical cybernetics: In contrast, in his view, man is more than an information-processing machine determined by stimulus-response relationships, but rather a spontaneous and creative living being that exhibits more complex emotions and needs and a multi-layered personality that shapes its behavior and can only be understood as embedded in its environment. Of particular importance for humans is the level of language and symbols, a hypothesis that must now be reassessed in the age of digitalization. He has also demonstrated this in his organismic systems psychology.

Felix Tretter explained the outline of the conference topic:

Under the title “Homo sapiens, Homo neurobiologicus and Homo digitalis -anthropological perspectives”, Tretter gave an overview of the current focal points of the debate about a Homo informaticus or more specifically a Homo digitalis, whose claim to the validity of the classical-humanistic form of images of man with regard to the “conditions of possibility” of being human (conditio humana) as elaborated by Hannah Arendt and above all by Helmuth Plessner. The current occasions to correct the image of man as the ultimate animal rational in the sense of Aristotle are the more recent successes of Artificial Intelligence (AI), which consist in the fact that learning algorithms have been implemented by machine, which not only play chess or go better than humans, but are also superior in playing skat. Also, some medical diagnoses can be made better than by doctors using big data. This leads to an inferiority experience of humans and thus to a shaking of the classical humanistic view of man in the sense of Homo deus nach Yuval Noah Harari. On the other hand, however, the all-round implementation of ICT in everyday life shows that there are considerable shortcomings of ICT, on which people are becoming increasingly dependent because conventional practices (e.g. customer services) are becoming increasingly automated (e.g. hotline). Also the dysfunctionality of the “terminals” for some users and situations, such as the user interface of the hardware via touch screens, with its sometimes deletante “delayed response”, even blamed by the US Navy for a shipwreck. Or the software, which in human interaction is designed according to algorithms in the form of a mechanistically inhuman but standardized flow logic. This reflects the mindset of business “quality management”, which demands standardized “algorithmized action” from its employees and which forms the basis for digitization. Another area is Big data, which is seen as an unwanted data donation by individuals and increasingly by ICT companies as their real interest, namely to obtain as much data as possible about ICT users. From genome analysis to facial geometry and psychometry, from apparently joking personality tests in social media to medical cerebrometry and the sociometry of networks of friends made possible by social media, the merging of data leads to a holistic recording of the human being in the form of a multidimensional description of behaviour, which is used to predict and influence behaviour, not only in the commercial but also – as the Cambridge Analytica scandal shows – in the political sphere. Thus, the fundamental experience of inferiority is accompanied by an everyday experience of being overtaxed. Some people experience a digital burnout. In addition, the permanent use of ICT changes affective-cognitive information processing and thus the brain structure, not to mention social life, which some experts describe as “digital dementia”, especially with regard to child development. In other words, although ICT is more perfect than humans in each of its partial performances, humans are perfect in comparison to machines, despite their imperfections in the sense of the Prometheus myth: The low-dimensional “perfection” of the imperfect machine must therefore be compared with the complexity of the human being, who is “perfect” through his diversity, but “imperfect” in detail. The “German Data Ethics Commission” has fundamentally emphasised the perception of the danger to human beings, which arises in view of the comprehensive developments of digitisation, in the sense of “digital ethics”: It emphasises the necessity of safeguarding the “dignity of the human being”: “The dignity of the human being, which stands for the unconditional value of every human being, prohibits both the digital total measurement of the individual and his degradation through deception, manipulation or exclusion”.

In this respect, it is therefore necessary to examine what is essentially human and how it relates to the impact of digitalization as a socio-technical supersystem in the everyday world. The following areas are in the foreground:

1) What is an image of man, and which academic discipline has the most robust insights into this? Can philosophy help?

2. the human image of the sciences

4. the special professional role of psychology

5. the social and sociological perspective

KLAUS MAINZER (Emeritus of Excellence, TU Munich / Carl Friedrich von Weizsäcker Center, University of Tübingen) could not participate due to the Coroana crisis and could not present his contribution entitled “Künstliche Intelligenz. When do the machines take over?”. The lecture was planned as a presentation of the update of the book of the same name. It will be made up in live form in Vienna as soon as possible.

THOMAS SCHMAUS (Alanus University, Alfter/Bonn) examined the topic of “Der (un-)berechenbare Mensch. Philosophical remarks on digital sustainability”, he examined some of the problems of measuring human beings. He focused on the significance of temporality for the Conditio humana and, in a time-phenomenological outline, emphasized the differential significance of the terms “Futurum” and “Adventum” for the human experience of the future. Futurum is understood in this context as a future that can be derived and predicted in principle from the past and present – Adventum, on the other hand, denotes the experience of a future that is largely undetermined, unplanned and surprisingly occurring.

ECKHARD FRICK (Munich School of Philosophy) examined psychosomatic anthropology in the light of digitalization. From the perspective of anthropological psychosomatics, he focused on the phenomenon of shame, whose phenomenological prerequisite is Plessner’s “eccentric positionality” of the human being.

GERHARD GRÜNDER (Central Institute for Mental Health, Mannheim) also gave a lecture on the topic of Homo neurobiologicus and digital psychiatry. He focused on digital phenotyping in current psychiatric research, for example by electronically recording and analyzing tweets about sleep disorders. In psychiatric research and also in practice, the sensitivities of bipolar patients are increasingly being recorded on smartphones and sent to the hospital server for analysis. The aim is to record the course of symptoms more precisely and to identify critical constellations so that prophylaxis can also be carried out.

PETER REICHL (Informatics, University of Vienna) presented the project PANDORA -Philosophical Anthropology in Digital Change. He began by referring to the philosophy of Günter Anders, who saw the strategy of dialectical reversal of terms as an option to recognize their deeper truth content. Responsible design of digitisation, for example in the form of a kind of “digital ecology”.

CHRISTOPHER FRAUENBERGER (Computer Science, Vienna University of Technology) briefly outlined basic questions of human-machine interaction. Using his work as a computer scientist with autistic children as an example, he presented some of the areas of work that involve these challenges. He concluded that the issue is guidelines for the design of digital technologies in the form of “participatory design”. This should be made clear to politicians so that they set the course for such developments. But this would also require a culture of productive debate that would enable dialectical development.

The detailed minutes of the online conference can be found here.

Conclusion of the conference

The discussions in the mass media and social media about the performance of digital ICT in terms of human skills represent uncertainties, insofar as they cannot be related to an explicit foil of a contemporary anthropology. Accordingly, the sometimes very superficial concepts of transhumanism and posthumanism find a good breeding ground. A contemporary anthropology could – as was shown several times during the conference – be based above all on the concept of Helmuth Plessner, who identified both the all-round affinity for technology as “natural artificiality” and the mediality of the digital through the “mediated immediacy”. With regard to the man-machine comparisons that must actually characterize the anthropology of the 21st century, Plessner also offers a striking distinguishing feature from ICT machines in hardware and software through the basic concept of “eccentric positionality”.

Perspective of the conference

The conference has strengthened the impression that a deepening of this discourse – here briefly called “human image debate” – through the participation of various disciplines from the technical/computer sciences, philosophy, the humanities, behavioural sciences, bio-, social and cultural sciences is of fundamental importance for the self-image of human beings in the digital age. Accordingly, further conferences or research projects should follow.

The BCSSS is looking forward to the coming steps and dialogues.